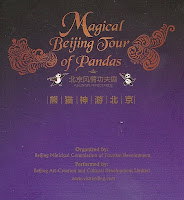 A huge thank you to the Irish Institute for Chinese Studies and UCD Confucius Institute for Ireland to granted our school 10 tickets to see the fantastic Kung Fu Spectacular presented by the production team of Beijing Olympics 2008, organised by the Beijing tourism board. The fabulous show took place at the Convention Centre, Dublin on Thursday 16th February, 2012. A big thank you to a close friend who sourced out the tickets for myself and family too!

I have not seen something so fantastic that combined Chinese culture, Kung Fu fighting skills, wonderful music, colourful costumes and beauty of production all so well together.

The Magical Beijing Tour of Pandas featured two lovely pandas that learnt all kinds of Chinese Kung Fu skills such as Tai Chi, Chinese boxing, monkey boxing, drunken boxing, swords fighting, sticks fighting and many more. We also enjoyed the Peking opera, acrobatics, sleeves dance which was my daughter’s favourite part and the carnival at the end.

What an unforgettable night and best of luck with both Beijing and Dublin tourism development!

Posted by Evan Furlong at 22:40 No comments:

New songs we learnt this week

For the class on Wed, we've got:

I hope children enjoyed the story about Lantern Festival.

We didn't make the gluten rice balls this year as children did not like them last year but instead, we have make some lanterns from the beautiful red-envelops, red spring couplets and red papers.

Posted by Evan Furlong at 22:10 No comments: