We have few places left for our fun summer camp 2017 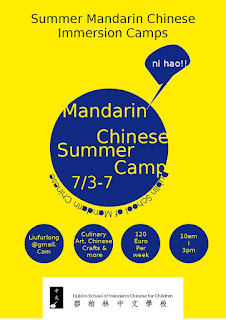 Mandarin language should be offered for Leaving Certificate Exams

Mandarin language should be offered for Leaving Cert. as it's offered for Ancient Greek, Hebrew & Japanese as well as non-curricular EU languages.
This is the letter that I am sending to the Minister of Education & Skills.  Richard Bruton T.D. (minister@education.gov.ie) as well as my local politicians and I hope you will too.
To whom it may concerned:
Re Mandarin Chinese should be included in the Leaving Cert curriculum.
Dear Minister
I am writing to you to express my passion re subject matter and would like to pledge your support to push this matter further as soon as possible.
According to the census in 2006, there were 11,161 Chinese speaking people living in Ireland. In 2011, this numbers has increased to 15,166. In the same report Japanese speakers were 1,309 by comparison. Other languages which are included in the curriculum such as Hebrew and Greek don't even make it to the chart. Giving the increasing numbers of Chinese speakers in Ireland census after census, it's only fair that they have an equal opportunity to have the language recognised be accredited for entering 3rd level education.
Ireland has known for their equality law given to the recent marriage referendum. Quote from IHREC: Irish law prohibits discrimination and promotes equality in a wide range of areas. Article 40.1 of the Constitution of Ireland states that “[a]ll citizens shall, as human persons, be held equal before the law”. The Irish courts regularly apply the equality guarantee in the Constitution in their case law.
These are some reasons why Mandarin should be added to the Leaving Cert.
1) 845 million speak Mandarin as a first language, as compared to English with 328 million.
2) China is one of the world's largest and fastest growing economies.
3) There are 3,533 Chinese pupils aged 15 years and over resident in Ireland in 2011 and this number is increasing.
4) There are more than 5,000 pupils who are currently taking Chinese studies.
5) The UK has offered Chinese as an exam subject since 2009 and last year nearly 4,000 pupils sat the Chinese exam.
4 years ago, the then minister of education announced that Mandarin Chinese will soon be an exam subject on leaving cert. But as yet there's no time frame for when this will take place. I sincerely hope you will make this happen and make history! Thank you for your time in this.
regards
Evan Furlong
Sign petition here.
Ref:
http://www.cso.ie/en/media/csoie/releasespublications/documents/population/non-irish/nonirishnationalscomplete.pdf
http://www.cso.ie/en/media/csoie/census/documents/census2011profile6/Profile,6,Migration,and,Diversity,entire,doc.pdf
https://www.examinations.ie/?l=en&mc=ex&sc=eu
http://www.boards.ie/vbulletin/showthread.php?t=2055723122
Posted by Evan Furlong at 13:19 1 comment: