I am very excited to tell you that Dublin School of Mandarin Chinese is proud to present our popular idol NeZha (The Third Prince) at the St Patrick's parades on the Ray D'Arcy show tonight and in the St Patrick's Festival in Bray tomorrow.

The Third Prince is an important symbol of Taiwan's "cultural diversity." in the past 400 years.  He was originally a deity in Indian Buddhism and later became an important idol within Daoism;  He's popular due to many reasons, his literary personality of rebellion & freedom and his cute appearance and energetic dance that are influenced by Japanese comic culture and American Street dance.
The Third Prince participates in the St Patrick's Parade in the hope to promote the sharing of the rich cultural traditions of the two islands, Taiwan and Ireland.

We would like to express our gratitude towards the 5 hard working Third Princes who trained tirelessly for these performances: Rian O'Loughlin, Matt Wu, Jason Liao, Ken Peng and Derry Yeh.

This project is sponsored by Taiwan overseas community affair council, Dublin School of Mandarin Chinese and the Taipei Representative Office in Ireland. 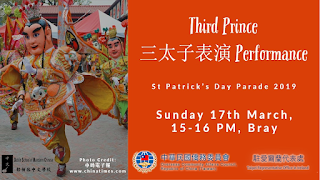 Your comments are welcome!